Milk thistle, sometimes referred to as St. Mary’s thistle, Marian thistle or silybin, is one of my favourite herbs of all time. The main constituents in milk thistle, the active ingredient, is silymarin. Silymarin is a powerful

antioxidant that protects the liver from toxicity. It is also anti-inflammatory. A healthy liver system is an integral part of whole body wellness. The liver is the major detoxifier in the body. Its cells work all day and night to clean up and clear the body of all the offenders that it was exposed to.

From the food we eat to the air we breathe to the furniture we sit on to the clothes we wear, our bodies are consistently and continuously bombarded by offending toxins that the liver cells need to detoxify and clear from the body. Milk thistle is one step one can make to help the liver cells fight this battle. 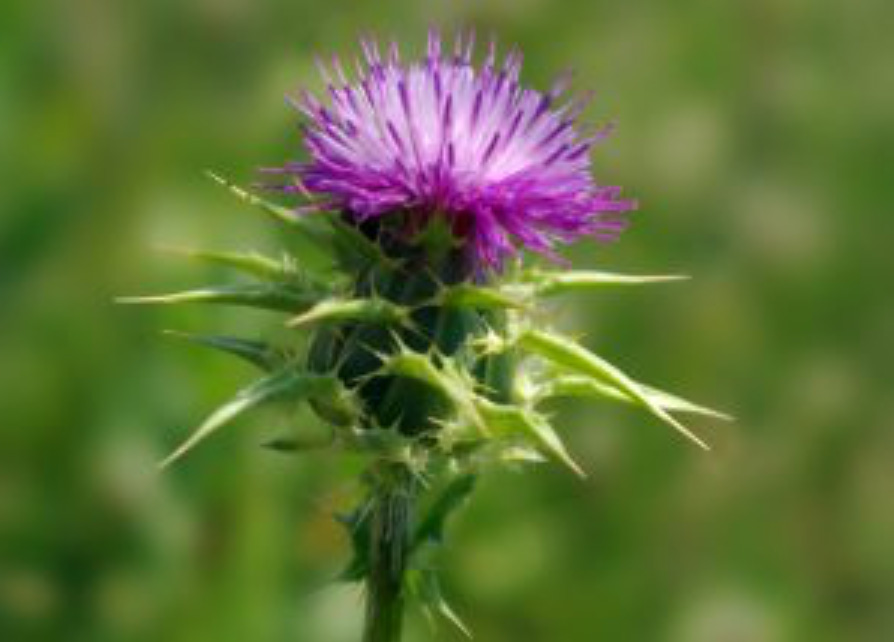 Milk thistle has been used since ancient Greece and Rome as a remedy for a variety of ailments, but particularly for liver problems. Modern scientific research now supports this.

Originally, milk thistle got its name from the Doctrine of Signatures. In the 1600s, this was based on the idea that God had endowed everything in nature with healing powers with a ‘sign’ or ‘signature’. The plant had clues in the shape of their roots or leaves as to how they were supposed to be used. Milk thistle, because of its milky white mottling of its leaves, was thought to be good for stimulating milk in nursing mothers.

In the 1960s, German researches undertook a chemical analysis of milk thistle and isolated a series of compounds that became known as silymarin. Silymarin proved to have powerful liver protecting qualities. Milk thistle is widely used by herbalists for the protection of the liver and the repairing of damaged cells. It is also used in the treatment of viral heaptitis as well as liver damage caused by toxins, alcohol and drugs. In Europe, milk thistle is used as a primary treatment for poisoning my the death cap mushroom, which contains a poison that causes irreversible liver damage and death.

Milk thistle actually works by stabilizing cell membranes of the liver cells. It alters the structure of the membranes so that toxins are prevented from entering the cells. Clinical studies have reported marked improvements in patients with alcohol-induced liver disease/ cirrhosis. Milk thistle is still being used as a treatment for Hepatitis, but the studies are showing mixed results thus far. Because of this, milk thistle alone may not be enough as a treatment for Hepatitis C. Early studies suggest anticancer effects. In the lab, silymarin has been shown to reduce the growth of human breast, cervical and prostate cancer cells. These studies are in their early stages, and milk thistle is not yet used regularly in the treatment of cancer. A limited number of studies seem to suggest that milk thistle lowers cholesterol. This would make sense, as it’s already been shown to improve and repair live function. We need a healthy liver system to maintain healthy cholesterol levels. Also in early stages, this research does not recommend milk thistle as a primary remedy for high cholesterol.

Some of the contraindications of the herb are allergies, it’s part of the Asteraceae family of plants. Caution is advised when the patient is on statins and allergy drugs, anti-anxiety drugs and blood thinners, dilantin and halothane.

There is still so much to be discovered with this amazing herb! For the liver system, this is the first herb I think of and recommend in my practice. Supporting the liver is almost always the first line of defence in hormone issues, gastrointestinal problems, environmental toxin exposure and depression and anxiety issues. I believe that we’ve only scratched the surface in uncovering the wide-spread uses and benefits of Milk Thistle. Keep your ear to the ground on this one. I look forward to updating you as the research continues…